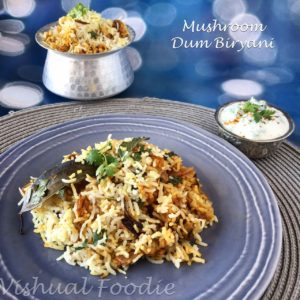 Your sister says she is coming over for lunch and her constant gripe is that I don’t cook anything for her. So this time I thought would take an effort to make something elaborate.

Now when it’s a Tuesday and she follows a no nonveg day, that would certainly leave me in a fix. Lazy bum that I was I had not stocked the fridge too. But luckily had 2 packets of mushroom which I had bought recently for a pasta order but the client told me not to add any at the last moment.

So now I have these mushrooms and I was racking my brains on what to make. And then I remembered my mom making this mushroom Biryani recently so I thought why not, it’s pretty yum

Mushrooms are considered a vegetarians meat due to its flavour and texture. What a perfect ingredient to a dish that is quintessentially made with meat. Was tempted to add eggs to it but controlled.

Well the end product is for u to see and us to hog and hog we did. All over in one meal.