I recently joined a group of amazingly talented chefs #chefsacrossboundaries where we challenge each other to learn, grow and share our culinary knowledge. This month the theme was regional recipes and the uber talented Sujatha Arun gave me her recipe of Sakkarai Pongal to attempt.

The recipe is relatively easy and the finished dish is amazingly flavoursome. My daughter insisted that I send her a box during her lunch break. She came home sad as all her friends gobbled it up before she could eat it. So promised her to send more the next day. If the kids approve, then you know you have a winner on your hands

Sakkarai Pongal is generally prepared in temples as an offering to the deity, as a thanksgiving. It is one of the delicacies made to celebrate the Pongal festival. A little more about its namesake festival. 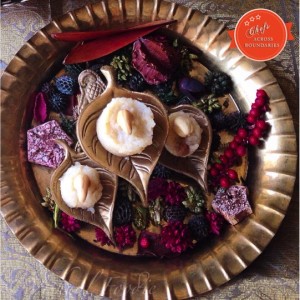 Pongal is a harvest festival celebrated in Tamil Nadu. The festival is a way of giving thanks to nature and takes its name from the Tamil word meaning “to boil”. This is traditionally also the month of weddings. In a largely agricultural community – the riches gained from a good harvest form the economic basis for expensive family occasions like weddings.

Some legendary stories are also associated with Pongal festival celebrations. The two most popular legends of Pongal are stories related to Lord Shiva and Lord Indra.

According to a legend, once Shiva asked his bull, Basava, to go to the earth and ask the mortals to have an oil massage and bath every day and to eat once a month. Inadvertently, Basava announced that everyone should eat daily and have an oil bath once a month. This mistake enraged Shiva who then cursed Basava, banishing him to live on the earth forever. He would have to plough the fields and help people produce more food. Thus the association of this day with cattle.

Another legend of Lord Indra and Lord Krishna also led to Pongal celebrations. It is said when Lord Krishna were in his childhood, he decided to teach a lesson to Lord Indra who became arrogant after becoming the king of all deities. Lord Krishna asked all the cowherds to stop worshiping Lord Indra. This angered Lord Indra and sent forth his clouds for thunder-storms and 3 days continuous rains. Lord Krishna lifted Mount Govardhan to save all the humans. Later, Lord Indra realized his mistake and divine power of Krishna.

Pongal Celebrations
According to Hindu mythology, this is when the day of the gods begins, after a six-month long night. The festival is spread over three days and is the most important and most fervently-celebrated harvest festival of South India. A special puja is performed on the first day of Pongal before the cutting of the paddy. Farmers worship the sun and the earth by anointing their ploughs and sickles with sandal wood paste. It is with these consecrated tools that the newly-harvested rice is cut.

Each of the three days are marked by different festivities. The first day, Bhogi Pongal, is a day for the family. Surya Pongal, the second day, is dedicated to the worship of Surya, the Sun God. Boiled milk and jaggery is offered to the Sun God. The third day of Pongal, Mattu Pongal, is for worship of the cattle known as Mattu. Cattle are bathed, their horns polished and painted in bright colors, and garlands of flowers placed around their necks. The Pongal that has been offered to the Gods is then given to cattle and birds to eat.

The recipe as I made it, with the ingredients at hand, noted below for easy reference